Psychics Who Did Nothing Good To Their Clients

It’s very hard to generalized and say that “all psychics are scammers.” After all, the world is a lot more complex and strange than we know, and it’s certainly possible that the waves of energy created by human brains can be detected outside them. On the other hand, most people who claim to be psychics -– and take money for their services -– are con artists through and through. In this feature, we’ll spotlight ten amazing stories of mind-readers who pulled huge scams on their customers.

If you’ve ever walked the streets of New York City, you know that fortune-tellers and palm readers are a dime a dozen there. The Big Apple welcomes hordes of tourists each year, and inevitably some of them get sucked into these places and spend some money. Nancy Marks was Gotham’s top scammer, enticing customers into handing over massive amounts of money and valuables in exchange for “removing curses” that were keeping them back. In 2011, cops busted Nancy and several members of her family for extortion, money laundering and fraud.

$136,000 to Lift a Curse
Let’s get this out of the way right off the bat: “Peaches Stevens” isn’t the kind of name that makes us think of mental powers beyond those of mortal men. But for a woman named Priti Mahalanobis, Stevens was her one way out of a host of personal problems -– until she wasn’t. Mahalanobis responded to a junk mail ad for $20 readings, but after a consultation with Stevens she learned that there was a curse on her family that needed to be lifted. Stevens told her mark to perform numerous costly actions, including purchasing seven $19,000 tabernacles and lots of expensive jewelry, to lift the curse. Mahalanobis was driven deep into debt and lost her ownership of a Quizno’s franchise before she went to the cops.

The Devil’s Egg
Psychic scams aren’t a recent invention. Hustlers have been bilking the gullible since the dawn of time, and here’s a particularly juicy one from the mid-1950s. Volga Adams was one of New York’s most successful storefront fortune-tellers, and when she was visited by wealthy widow Frances Friedman in 1956 she instinctively knew that she had a big fish on the line. Adams told Friedman to bring her an egg from her house, and when she did the phony psychic palmed it and replaced it with one that she’d prepared in advance with a plastic devil’s head inside. After cracking it open, the widow was convinced she was under a spell and handed over $108,273 to Adams (a fortune in those days). Over the next few years, the fortune-teller continued to bilk the widow until the police tracked her down in Florida.

The $14,000 Rock
One of the trickiest things about running psychic scams is that you don’t have any physical merchandise that you can hand over in exchange for huge amounts of cash. So when Upper East Side psychic Betty Vlado wanted to up her extortion game, she had a brilliant idea: rocks. Vlado convinced several clients that their “auras were dirty” and sold them plain old rocks that she claimed were fragments of meteorites provided her by people at NASA. The charge for these hunks of stone? $14,000. Cops busted Vlado in 2013 and she took a plea deal and promised to pay all of the money back.

The Planted Skeleton
Police turning to “psychics” to find lost people and dead bodies never works out, but mendacious mediums still put themselves forward as the supernatural answer to “Law & Order.” Let’s head south of the border for a truly weird twist on the formula. In 1997, Mexican psychic Francisca Zetina, who calls herself “La Paca,” led cops to a buried body in the yard of Raul Salinas, the brother of the country’s former President. The corpse was alleged to be the remains of a Congressman that Raul had beaten to death. Under interrogation, however, Zetina admitted they were from one of her in-laws, who she had exhumed and reburied on Salinas’ property as part of a convoluted scam. 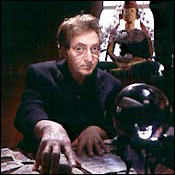 You have to be a particularly scummy swindler to bilk a retiree out of nearly a quarter of a million dollars. Anna Marie Adams was a Los Angeles psychic who met an elderly woman from Florida in the spring of 2013. The fraudulent medium made a big impression on her mark, and offered consultations by phone and text message. The price for those consultations was high -– Adams eventually took over $220,000 in payment. But that wasn’t good enough for this psychic fraud, as she also stole the woman’s personal information and used it to buy a BMW 640i.

$900,000 for True Love
If you have a million dollars to throw away on psychics, you shouldn’t have problems finding a girl. But for a man named Bryan James in Tarzana, California, the quest for love took a detour into the spirit world. In 2011, the dispirited James walked into a local psychic business owned by a woman named April Lee looking for help with love, career and health. Whatever they told him must have resonated, because Lee bought into the idea that he needed to “cleanse his life” before he could find a lady love. The psychic started charging him more and more for her services, and by 2013 he’d borrowed almost a million bucks from friends and family to pay her, never telling them where the money was going.

Miss Cleo’s Psychic Hotline
The advent of 1-900 numbers in the early 1990s changed the psychic scam game completely. Now you didn’t have to wait for some rube to stumble into your storefront. Instead, a cheap ad in the back of a magazine brought customers from all over the world, billed by the minute. The queen of psychic phone scams was Miss Cleo and the Psychic Friends Network. This corporation took in over $100 million a year in profit, with “readings” delivered by bored suburban teenagers delivering lines from scripts. The company went into bankruptcy in 1998 and in 2002 the FTC nailed them for deceptive advertising.

$700,000 Love Affair
One of the most flabbergasting psychic scams we’ve ever heard of comes out of the mean streets of New York City. A man from Brooklyn walked into a Times Square fortunetelling parlor in 2013, despondent about a long-distance relationship with a woman from Arizona that wasn’t working out. The psychic, Priscilla Delmaro, knew she had a ripe one. First she charged him $2,500, then made him buy diamond rings, a gold Rolex and hand over increasingly large sums of cash to build a “bridge of gold” that would lure the spirit keeping him and the woman apart away. After 20 months, the total take was over $700,000. After discovering that his dream girl had actually died unexpectedly without the psychic saying anything, things got weird and he went to the cops.

$12 Million Property Scam
Let’s close this out with the biggest-money psychic scam we’ve ever heard of. Over the course of a decade, an Oregon woman named Rachel Lee used her supernatural powers to get in the good graces of a tree farmer from Gaston and convince him to sign over $12 million in property to her. Lee finagled a job as a home health care nurse to the man’s ailing father, and then brought in her daughter as a woman from England who needed to marry for a green card. The lonely farmer took her up on it, and the scam continued with the pair convincing him he’d fathered a child named Giorgio Armani by her (he hadn’t) and had to sell off his farm to pay his inheritance tax. The women used the cash on fancy automobiles, luxury trips and other pleasures until the IRS intervened.

A Psychic Who Never Failed